‘I don’t know how my pictures happen, they just do. They exist, but for the life of me I can’t explain them’.

Beryl Cook was born in 1926 in Surrey, England, one of four sisters. She left school at fourteen, showing little talent for painting and worked in a variety of jobs. Moving to London in 1943 Beryl became a showgirl in a touring production of ‘The Gypsy Princess’. She also worked in the fashion industry, which inspired her life-long interest in the way people dress and how they look.

In 1946 Beryl married her childhood friend John, who was in the Merchant Navy. When he retired from the sea they briefly ran a pub. Their son John was born in 1950, and the following year they left to live in Southern Rhodesia. This move was to prove a turning point for Beryl. One day she picked up some paints belonging to her son and started a picture. She enjoyed it so much she could not stop. She painted on any surface she could find, scraps of wood, fire screens and most notably a breadboard, as can be seen from her famous early painting of Bowling Ladies.

In 1963 the Cooks returned to England to live in Cornwall where Beryl began to paint in earnest. They moved to Plymouth, where in the summer months they ran a busy theatrical boarding house. Beryl loved Plymouth, a thriving, lively seaside town full of pubs, fishermen and sailors and she and John enjoyed going to their local bars and watching flamboyant drag acts. Beryl would concentrate on painting in the winter months, recreating her personal views of Plymouth in vivid oils on wooden panels. Eventually an antique dealer friend persuaded her to let him try and sell a few. To her surprise he sold them very quickly. Bernard Samuels of the Plymouth Art Centre became aware of this ‘local phenomenon’ and in 1975 he finally convinced her to have an exhibition. It was, of course an enormous success. The show received a great deal of publicity, which resulted in a cover and feature in the Sunday Times Magazine followed by a swift phone call from London’s Portal Gallery. The following year, Beryl Cook had her first London exhibition. It was a sell out and the start of an exceptional relationship with Portal, where she exhibited continuously for 32 years.

From the beginning Beryl’s work had a remarkable effect on the British, who immediately took her to their hearts. Her appeal was classless and she rapidly became Britain’s most popular artist. She was a ‘heart and soul’ painter, compelled to paint with a passion. Her paintings encapsulate joy; her style totally original, warm and so instantly recognisable that her work became part of our artistic vernacular.

Beryl travelled widely, gleaning new material for her work, often discreetly sketching on small cards inside her handbag to be hidden from view. Based in her beloved Plymouth, she recorded local life with as much relish as that in Buenos Aries, New York, Cuba, Paris and Barcelona. Though a late starter, Beryl completed over 500 paintings in her relatively short painting career. Beryl Cook’s work is particularly interesting when viewed in the context of the tradition of British social realist painting and she could easily be described as a contemporary Hogarth or Gilray, although she had a more sympathetic view of the human race. She was, like them, above all a social observer.

She recorded human frailties and the absurdities of human behaviour with her own unique vision. Beryl’s personality though was in great contrast to her paintings. She was a shy and private person, often depicting the flamboyant and extrovert characters she would love to have been. She preferred to observe a crowd of people, her acute eye missing nothing. She recorded in minute detail scenes of everyday life and had an almost photographic memory.

In 1979 a film was made about Beryl for LWT’s South Bank Show. The presenter, Melvyn Bragg, was evidently a devotee and they discussed Beryl’s inspiration for her paintings. Beryl admired the work of the English visionary artist Stanley Spencer, his influence is evident in her bold bulky figures and in her compositions. Edward Burra particularly appealed, he too loved to paint sleazy cafes, nightclubs, gay bars, sailors and prostitutes, though unlike Burra there is nothing sinister in her world. The appeal of Beryl Cook’s paintings is their directness, exuberance and the instant laughter they create. Her characters are always enjoying themselves to the hilt. Beryl was the least pretentious of painters and an artist in the same tradition as Breughel, though perhaps via Donald McGill! She was described by Victoria Wood as ‘Rubens with jokes’. In 1995 Beryl was made an OBE.

The TV company Tiger Aspect made two half hour animated films of Beryl Cook’s irrepressible women who meet at Plymouth’s Dolphin Pub. ‘Bosom Pals’, has an all star voice cast, including Alison Steadman, Rosemary Leach and Timothy Spall, with Dawn French’s voice as Stella, the pivotal member of the pals. BBC One screened the comedies in February 2004.

In 2005 Channel 4 New presented a short film of Beryl and her work, the first in 20 years! Beryl appeared in ‘Art School’ on BBC 2 in 2006 and was also the featured artist in ‘The Culture Show’ in October 2006 The news of Beryl Cook’s sad death in May 2008 was universally greeted with immense sadness and there were overwhelming Tributes on the front pages of National, International and Local Newspapers, Television and Radio Stations to a multitude of collectors and fans alike.

BERYL COOK at 80! This immensely successful and popular exhibition celebrated the artist’s birthday at Portal in September 2006. It was her eighteenth solo show with Portal Painters who still represent her. Beryl has had many Museum touring shows, most recently a Major Retrospective of the artist’s work was held at The Baltic, Gateshead during the summer of 2007. An exhibition to celebrate Beryl Cook’s life and work was held at Plymouth University in November & December 2008, featuring paintings from four decades. In 2011 Bristol City Art Gallery also held a retrospective exhibition. In 2013 The Oriel Gallery, Clothworthy, Co. Antrim hosted Beryl Cook first exhibition in Ireland. 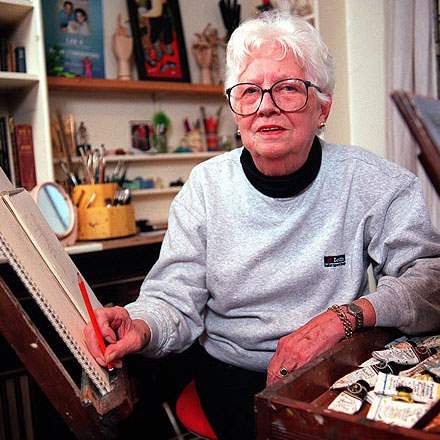 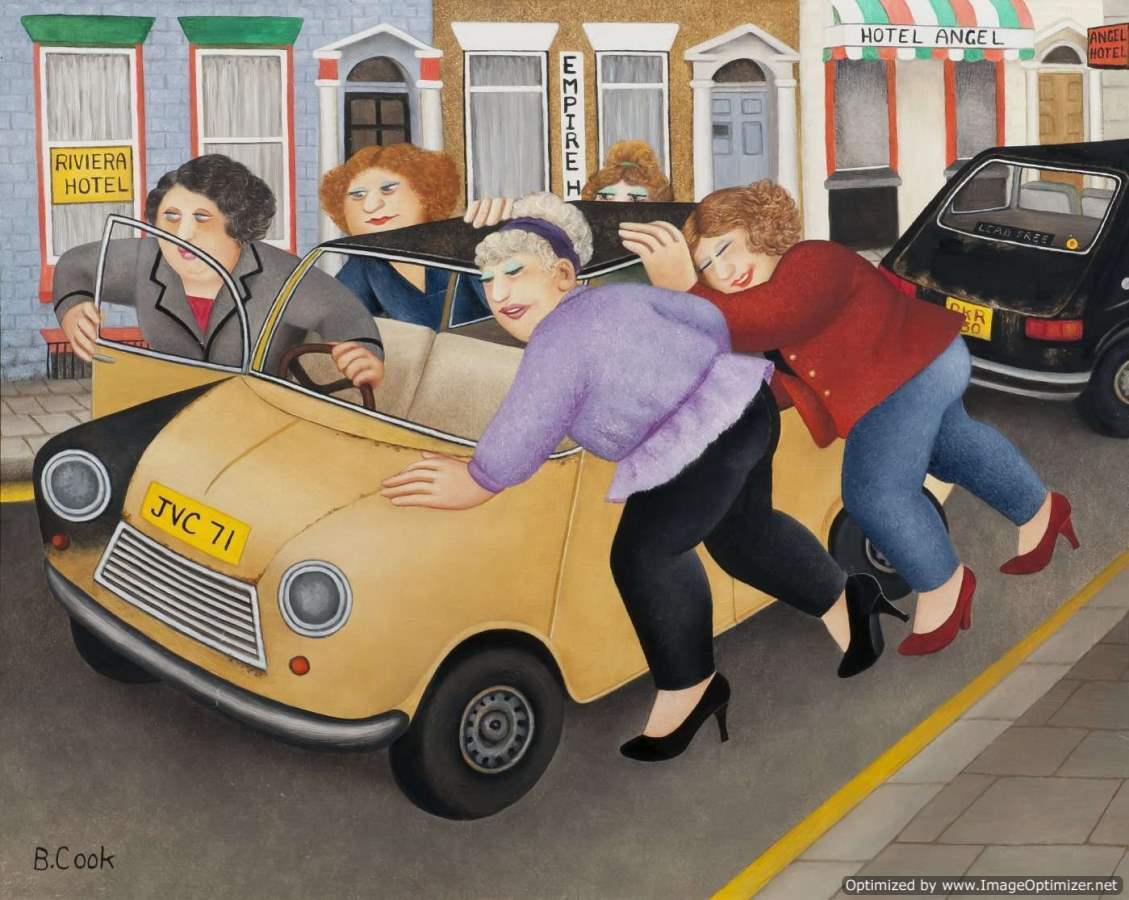