Frances Broomfield was born in 1951 in Warrington, Lancashire. She went to Warrington Art School and then to Newport College before moving to London.

Frances’ early paintings were influenced by childhood memories and dreams and by the contrast between the town and the countryside. Animals that live on the margins interested her: foxes and badgers, owls and herons and ‘The Old Straight Track’ by Alfred Watkins inspired her to research into sacred sites, Ley lines and standing stones.

Jung’s ‘Psychology and Alchemy’ led to a fascination with Alchemical imagery and the archetypal imagination. Whilst attempting to produce a series of paintings on the theme of Shakespeare’s ‘The Tempest’, Frances worked for a year with a Jungian analyst.

Frances has always been interested in eccentrics, Lewis Carroll and Edward Lear are favourites, she also admires the paintings of Bosch, Breughel, Max Ernst and Ernst Fuchs.

Frances works in oil and tempera on panels prepared with a gesso ground and uses liquin medium for glazing which gives her paintings a wonderful luminosity.

Frances has been commissioned to produce book jackets for many publishers and also worked on a series of paintings to illustrate ‘The Future Now’ by Derek and Julia Parker. Many of her paintings have been reproduced as greetings cards. Frances’ painting of the Cheshire Cat was used as the basis of a cartoon about Tony Blair !

The first book jacket Frances worked on required an illustration of a black mamba snake. The only reference was one in the Natural History Museum floating in a jar of preserving fluid, she had to take the snake out of the jar and prop its jaws open with a paperclip.

One of the most interesting studios Frances worked in was at The Guild of Transcultural Studies in an old house which had belonged to Maria Callas. The building was used for esoteric studies and inhabited by interesting characters including a one armed alchemist.

Frances Broomfield has exhibited with Portal Painters since 1980. 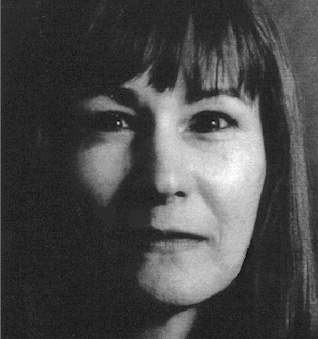 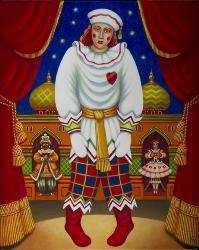 Size: 25 x 20 cms ( 10 x 8 ins)
Type: oil on panel
Prices: : £2300
Description:
The story of a puppet made of straw and sawdust but who comes to life, was put to music by Stravinksy, directed by Diaghilev and famously danced by Nijinsky in 1911.
Contact us about this painting