John Byrne was born in Glasgow in 1940. He was brought up and educated a Catholic. At seventeen he started work as a ‘slab boy’ mixing dyes for a firm of carpet manufacturers in Paisley in what he describes as a ‘technicolour hell hole’.

John studied painting at Glasgow School of Art from 1958 – 1963. Art schools in the sixties still had life drawing, painting and still life at their core and Byrne was considered a star pupil. He won a scholarship to Italy where he visited Assisi where he marvelled at Giotto’s frescoes, and at the paintings of Duccio and Cimabue and he returned from his travels a highly accomplished and confident young artist.

Byrne married in 1964 and had a son and then a daughter the following year. He worked as a graphic designer for Scottish TV and illustrated some book jackets. He returned to work for the carpet manufacturers, this time as a carpet designer.

In 1967 Byrne sent some paintings in a rather primitive style to London’s Portal Gallery signing them ‘Patrick’ and claiming that they were by his father, a Glaswegian newspaper seller. It seems that this was partly to do with John’s amusement at inventing odd characters, and also thinking that a gallery which at the time exhibited self – taught artists might not be interested in work by a highly skilled art school trained painter. He was wrong! John still exhibits with Portal Painters.

From the early seventies onwards John Byrne’s biography reflects his diverse talents. His paintings were used on record covers by Donovan, The Beatles, Gerry Rafferty and Billy Connolly. He also designed theatre sets, made an animated film and his first play ‘Writer’s Cramp’ (1977) followed by ‘ The Slab Boys’ (1978) won him the Evening Standard’s most promising playwright award. In 1983 there was a New York production of ‘The Slab Boys’ with Sean Penn, Val Kilmer and Kevin Bacon.

In 1986 John wrote the immensely successful television series ‘Tutti Frutti’ starring Robbie Coltrane, Emma Thompson and Richard Wilson. This was followed by another series ‘Your Cheatin’ Heart’ with Tilda Swinton. In 1993 John’s play about the two Scottish painters ‘Colquhoun and MacBryde’ was produced at the Royal Court. John wrote and directed a film of the ‘Slab Boys’ in 1996. In 1997 twins Honor and Xavier were born to John and Tilda. In the same year John adapted ‘The Government Inspector’ for The Playhouse Company.

In 2000 as an appreciation of one of their most talented sons Paisley Museum put on a major retrospective.

In 2004 Byrne wrote ‘Uncle Vannick’ a Scottish adaptation of Uncle Vanya. In 2008 John wrote a fourth play in the Slab Boys series entitled ‘Nova Scotia’, and in 2010 his version of the Cherry Orchard was premiered at the Royal Lyceum in Edinburgh.

A self – portrait and portraits of Robbie Coltrane, Billy Connolly and Tilda Swinton hang in the Scottish National Portrait Gallery in Edinburgh.

‘The Joyful Mysteries’ an exhibition at London’s Fine Art Society in 2012 was a sell-out.

In 2013 John was asked to design and paint the cupola of The Lyceum Theatre in Edinburgh – follow this link to see him painting it bit.ly/18uHgzW 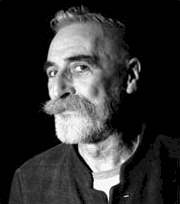 Cat in the Moonlight 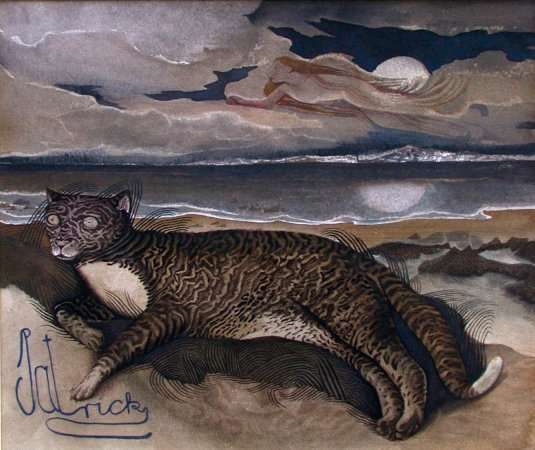