Mick Rooney was born in Surrey, England in 1944.  He was an exceptionally promising student at the Royal College of Art, and a prix de Rome scholar, studying for a year at the British School in Rome.  Rooney’s work is colourful, mysterious and atmospheric and his influences are so diverse that they are hard to pinpoint; however the influence of Judaism and Islam are often apparent.  He has travelled extensively in Europe, in Morocco and especially in Mexico where he spent time in native Indian villages.   He says of his work :  ‘ I am a narrative painter who seeks stories to tell, and as such I am ever conscious of the perceived difference between ‘high art’ and illustration.  I prefer the word illumination which, rich with the promise of clarity and insight, somehow speaks directly to the soul.

Then there is the question of what I choose to narrate and the problem of how to depict it, draw it out and colour it in, the time honoured method of making icons.  Over the centuries direct painting has gained the day, so it is somewhere among the rigid rules of the ancients and swashbuckle of the moderns that I struggle.  It is often wearisome to spend half a day painting a disjointed image, only to obliterate it or glaze it over, but it is that very process that builds ‘under spirits’ into the finished work. Paintings are often about a journey.  However the subject matters very little.  It is a chestnutty truism that one paints what is left after rejecting everything else.  Occasionally I allow myself a moment of objectivity, and might be heard to whisper  ‘ Not bad! Who did that?’  But always, like Sisyphus, I roll the stone back up the hill and, like Michael Finnegan, I begin again.’

Mick Rooney exhibits with Portal Painters at The London Art Fair and The 20/21 British Art Fair. 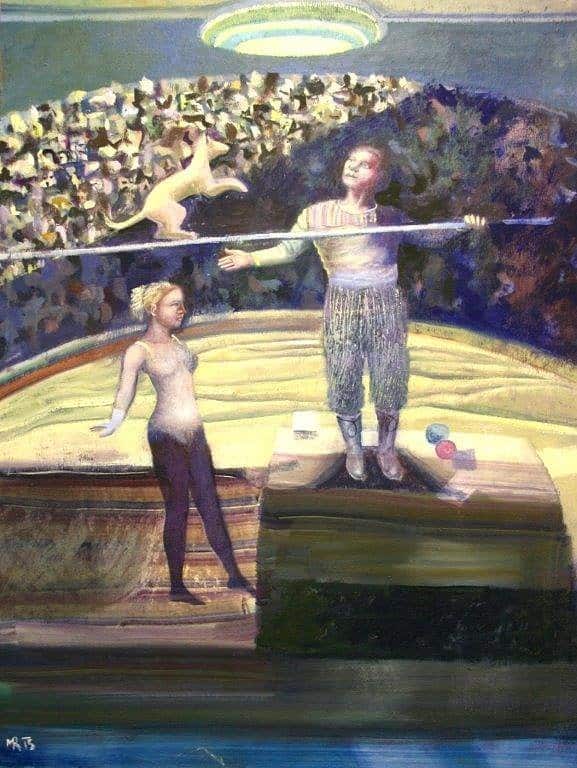